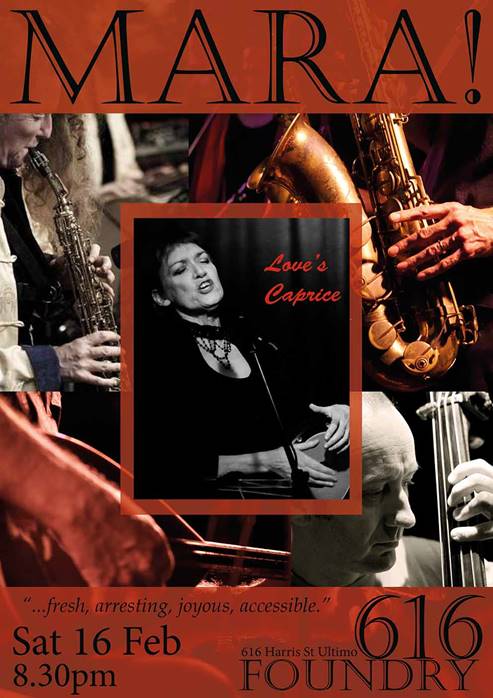 ARIA award winning world/jazz ensemble Mara! have been carving a new direction in contemporary music in Australia since the 1980s, and for over 30 years they have been touring their “fresh, arresting, joyous, accessible” sound across the Globe, challenging stereotypes and giving audiences abroad a new perspective on Australian music.

What the critics have been saying all along…

“….different sound-worlds kept opening up like fresh vistas on a maritime journey…ultimately it is the collective imaginative responses to its influences that makes Mara! such a bright jewel in Australia’s world-music crown.” Sydney 2016

“It was a treat and a privilege to hear this band in such intimate confines….an equally profound and giddy cycle of catharsis and celebration”Sydney 2003

“The music was intense…charismatic Mara Kiek … caught the attention of the audience, playing percussion and singing in several languages… infectious” Laos 2001

“All elements faultlessly fall into their place … their fusion is a wonderful experience.” Belgium 1999

“… many tongues, one heart… you’ll be cheating yourself if you miss them…” London 1991

“…Beautiful, better than new… the music is more than the sum of its components…” Bremen 1990

“… MARA! predate the current vogue for jazz and roots music. What they offered was a glorious melange of traditional and contemporary…”Glasgow 1986

“… their virtuosity and unexpected instrumental manoeuvres are breathtaking…” London 1985